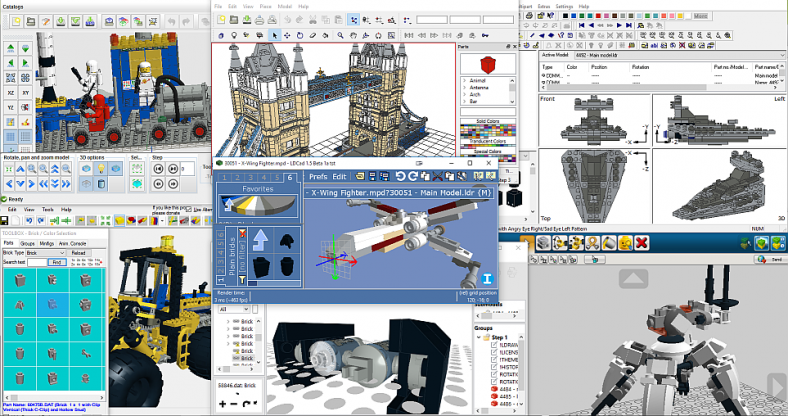 Wow, that took a lot more time than I had anticipated! I apologize if some of the sections appear rushed or if info was left out. Truth is, after playing around with the applications a bit I had settled on the following as the top two contenders:

I spent most of my time with them and then went back and played with the others to try and include a little more info besides, “I didn’t really like this program”. Hopefully you find some useful info in what has been written.

LDD quickly moved to the top of my list because it was pretty easy to use and the part snapping was really good. However, I didn’t really like the part search, grouping or color management as well as that of LDCad. Not a huge deal breaker, but the latest version is almost two years old and who knows what is planned for it.

LDCad’s controls were a little more difficult to adjust to and learn at first. However, after reading though the documentation I quickly started to pick things up and really started to like it. The part and color bins were great and made building easier and quicker. Being able to have all kinds of different split views and quickly toggle between 3D and 2D views was really helpful. Some might not like the GUI, but I think that’s one thing that really makes it stand out.  Roland Melkert, the developer of LDCad, is actively working on this program and constantly adding additional features.

You can customize the GUI of LDCad by modifying one of the config files and creating your own custom icons, but I haven’t messed with that yet (info here). One of my favorite features in the new beta build is the ability to edit part snapping data from within the application. I also love being able to have multiple color and part bins in the beta version as well.

So, of the top two, which did I choose?

If you haven’t figured it out, the overall winner and grand champion, by a landslide, is LDCad!

To be fair to the others, here’s a quick summary on why I didn’t choose them:

Read the documentation and watch whatever videos you can. Try more than one out, you won’t know what you’re missing and/or don’t like unless you do and you might even find out about features that you would otherwise have missed. You might end up using more than one. Also, check out the different forums to get help or just see what other people are saying or need help with. You’ll get the most out of the program(s) if you do.

LDraw forums or the Eurobrick forums are a great place to post questions if you can’t figure something out, or are just great to browse through and see what others have said or are working on. There are other great sites out there, but these are two that have come up frequently in my searches. Enjoy!

There you have it. Hopefully you enjoyed some of the read and found something useful. Good luck in your quest to find the best program for you!