Hmmm…what to say here. I guess at heart, I’m a “Geek”, at least my wife seems to confirm that on a regular basis. 🙂 I admit, I like gadgets, computers, video games, etc., but I also like other non-geeky stuff too! You know, sports (b-ball for one: I mean really, I’m 6’5″. Do you know how many times I’ve been asked if I play basketball?), mountain biking (the fun kind, like flying down the face of Big Bear Mountain), hiking and camping to name a few. OK, maybe I’m just trying to justify that I’m not a geek and I just need to come to terms with it and move on with my life. 😀

Anyway, it all started with LEGO. When I was a little kid I fell in love with LEGO. I would get them every year for Christmas, for my birthday, and if my parents ever took us to Toys-R-Us, my brother’s and I would beg and plead until they let us get a LEGO set, even if it was just a little one (I’m sure they loved that!). To this day, my parents still send me a little LEGO set for Christmas each year. I even have some on my desk at work: 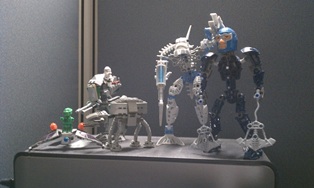 I loved being able to build and create all kinds of stuff with LEGO (and then destroy them, of course ;)). I loved that there were new LEGO sets to look forward to every year. I loved the challenge of coming up with a design in my head and then trying to build that with LEGO. When I was older I would actually use graph paper to draw up models and then build them (aircraft carriers, the space shuttle, an F-16, trucks, you name it). That kind of transitioned into building tree houses, then car stereos (I lost some hearing because of them :D), tricking out my mountain bike, souping up my ’67 Mustang, working in construction, etc.. I love building things! Along the way I also figured out that I was pretty good with math and since I liked stereos I decided I’d go to college to become an electrical engineer and design stereos.

Well, that didn’t quite work out and to make a long story short, after two years of college I switched majors. I went into music education with the intent to minor in Spanish and math. Towards the end of my schooling, despite my love of music, I realized that a career in music wouldn’t support a family very well and at the time didn’t offer a very stable future. I opted to just graduate with a degree in Liberal Studies (emphasis in Music Education and Spanish) and then struck out for a career in IT.

How did I go from music to IT? Well, along the way I bought a computer from a friend of mine. When I first got it I remember that I was scared to take it apart because I feared that I wouldn’t be able to put it back together and have it work. When I did take it apart for the first time I ended up labeling all the cables so that I made sure I plugged them back in correctly. It makes me laugh now since I know how easy it is and that most of the cables really only plug into one device: it’s hard to get it wrong. 😉 Well, despite my “fears”, my inquisitive nature kicked in and I started to learn all that I could about computers: how they worked, how to use them, and how to build them. This process led to many late and/or sleepless nights trying to figure stuff out as well as many late and/or sleepless nights playing games with my roommates and having LAN parties. 😉

I managed to get a job with a small, local ISP in Corvallis and then ended up doing some work on the side hosting websites. Hosting the websites is what really kicked it into high gear for me. I had a challenge to setup a hosting environment for websites and email so I dived into FreeBSD and learned a ton! I learned about setting up Apache, PHP, MySQL, DNS, Sendmail, Qmail, etc., and that the command line was pretty awesome! Since then things have just gone on from there.

One of the things I like most about IT is that it’s constantly changing: there’s always something new. I thrive on being able to continue learning and IT allows me to do that. IT also provides me with challenges. I love a good challenge and, honestly, get a little bored with stuff once it becomes somewhat commonplace and not much of a challenge (which is why change in IT helps fuel my passions).

Long story short: LEGO. For me it’s all about being presented with a challenge (a LEGO design on graph paper) and then building something that I can step back and admire (a space ship or replica of an F-16). The concepts, knowledge and experience I have gained in IT could be compared to individual LEGO building bricks. The LEGO designs I would come up with would usually require that I pull pieces (bricks) from many different sets to build my design. I had to be familiar with the sets and what they contained before I came up with my creation, otherwise I wouldn’t be able to successfully complete the project. IT is the same. I’m required to pull together concepts, knowledge and experience from many areas to effectively create a working infrastructure. One other thing that I loved about LEGO was that there were new sets that would come out every year. It would get kind of boring playing with the same set all the time and new sets added excitement and new bricks that could be combined with old ones to build bigger, better, more exciting creations. IT is similar in that it churns out new technologies and innovations all the time that can be used to add functionality, increase efficiency, drive down costs and just plane make things fun (if you’re a geek). 😉

But what about music? How does music fit into the equation? Well, let me try to illustrate that with the following: One day in college, during a sectional rehearsal for jazz band (I played the bari sax) we started an exercise that was fun and helped us to listen to what everyone else was doing. We had no music, no tempo, no direction, everyone just started playing. Little by little, the “music” started to develop. We all used our individual skills (bricks) and little by little pieced together a beautiful piece of music. At one point we all stopped at the same time. Everyone just looked around at the others in the room and then all exclaimed,  “That was awesome!” You had to be there to really understand it, but as we all listened to what was going on around us and “tuned in” we were able to piece together our individual bricks and create something amazing. I look back at that and wish we had been able to record it. It’s one of my favorite creations.

So, there you have it. Who am I? I’m the geek that loves LEGO. 😀 That’s what fuels me. That’s what makes me happy. That’s why I do what I do.